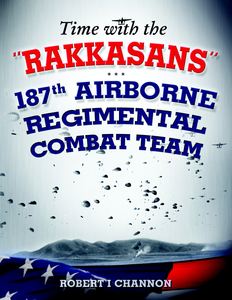 Time with the “Rakkasans” 187th Airborne Regimental Combat Team - Work on this booklet was inspired by my very dear friend Lieutenant Colonel Bill Robbins, U. S. Army, Retired. Bill had served a number of years in an ABU Company within a battle group and a battalion of 327th Airborne Infantry. During that time, his company had a very unusual mascot. The mascot had become a rallying symbol for company members for a long period of time. Images of this mascot had been painted on billboards outside the company orderly room at various times over the years. Some of the images were inside of the barracks. Any number of the company troopers had the image tattooed on their legs. Bill had written a book about his times with the company, especially about their time in combat in Viet Nam. He wanted to find how the mascot had originated and had searched for an extended period of time. Bill finally found me in 2014 and told me what had happened with the mascot over all the years of time. Bill wanted to write a sequel to his book and asked me to help him write about how the idea got started to include in his new book. The idea started in Company I of the 187th Airborne Regimental Combat Team back in early 1953. Over the years, Bill had had some 197th time himself. He began encouraging me to write about my time with the 187th. During the Korean War, I had been in the Korean theater, which included parts of Japan, for about 27 months continuously. About two years of that time had been with the 187th. To tell a more complete story, it seemed appropriate to tell about time of the 187th in combat before I got there and then what happened while I was there. When I learned how the mascot history had continued longs after I had left, it seemed fitting to outline that history also. My indebtedness to Bill Robbins is explained throughout this booklet.

The record of the Eighteenth Georgia Volunteer Infantry Regiment can withstand a critical comparison with any regiment in the American Civil War, North or South. As warriors, the men of the Eighteenth Georgia could stand shoulder to shoulder with soldiers of any storied unit in US military history. In the three years, eleven months, and twenty days of the regiment's existence, the stubborn men in the ranks trained, marched, and fought from Camp McDonald (outside Atlanta) to Appomattox, burying their dead on battlefields in Virginia, Tennessee, Maryland, and Pennsylvania. The regiment's casualty rate was astounding, even by Civil War standards. By war's end, the butcher's bill tallied 162 men killed or mortally wounded in combat, 221 killed in accidents or lost to diseases, 340 wounded, 305 captured (most of whom were sent to Northern prisoner-of-war camps), and four missing and presumed dead. Only 55 men were left to stack arms when the Army of Northern Virginia was formally surrendered on April 12, 1865. The regiment's journey from Camp McDonald to Appomattox was paved with stunning victories, stinging defeats, and unfathomable hardships. Vermin, poor (or no) food, inadequate clothing and equipment, and lack of sleep sapped the men's strength and destroyed their health-but not their discipline, morale, or aggressiveness. Most times cheerfully but sometimes stoically, the Georgians endured the physical and mental pains of destitution, disease, and death as they followed the regimental battle flag from Georgia to Virginia, North Carolina, Maryland, Pennsylvania, Tennessee, and West Virginia. They logged more than five thousand miles, zigzagging across mountains, hills, streams, rivers, swamps, farmlands, and woodlands. This marching and countermarching always portended more fighting and dying. The regiment participated or came under fire in forty skirmishes, engagements, battles, and other operations, suffering casualties in twenty-one of them. The Eighteenth Georgia was prominent in eight of twelve battles where Union forces suffered the most casualties during the war: Gettysburg, Spotsylvania, the Wilderness, Chancellorsville, Second Manassas, Cold Harbor, Fredericksburg, and Sharpsburg. The Georgians were on the field for two of the other major battles-Chickamauga and Petersburg-but were not engaged. The only two major battles they missed were Murfreesboro and Shiloh. Yet miles covered, battles fought, and blood shed are not the sole, or even the most decisive, factors that constitute greatness in a military unit. Some units may fight in obscurity, while others appear at a decisive time and place on the battlefield. Most regiments in Lee's army distinguished themselves on one battlefield or another. Some were prominent on multiple battlefields, thus earning the undying admiration and respect of Southern people. But when it came to helping "Bobby" Lee win a decisive victory or stave off a disastrous defeat, no regiment was more conspicuous than the Eighteenth Georgia. Its name is forever inscribed on the scroll of Confederate regiments that were in the right place, at the right time, and in the right formation to make a significant difference during the battles of Gaines's Mill, Second Manassas, South Mountain, Sharpsburg, Fredericksburg, Chancellorsville and Salem Church, Gettysburg, Wilderness, Spotsylvania Court House, and Petersburg. Through recollections of his own great-grandfather and from other firsthand accounts, Brigadier General Jerry C. McAbee, USMC (ret.), takes us on the journey of the Civil War soldier. We follow the decision making and strategy that led to the end of the war. We understand the mentality of battle-weary men following the directions of a desperate leadership. And we see the side of the Civil War often overlooked by history. This is the true story of a regiment of stubborn men from Georgia. 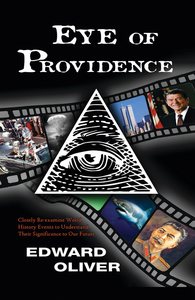 Closely Re-examine World History Events to Understand Their Significance to Our Future,