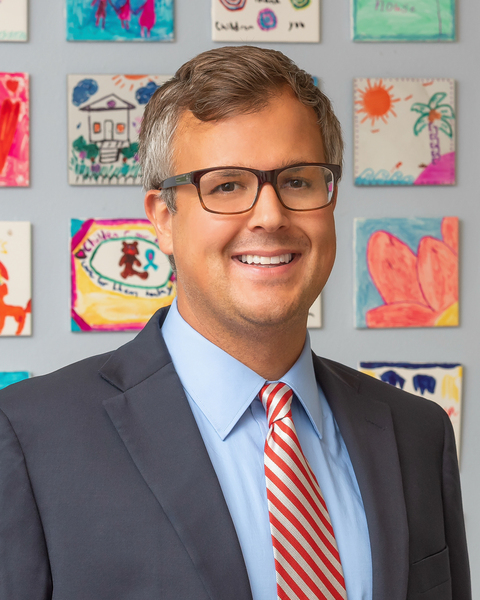 Thomas Mitchell serves as the Executive Director of Children’s Advocacy Center - Hope House. He graduated from Nicholls State University with a Bachelor of Arts in Psychology and a Master of Arts in Psychological Counseling. Thomas began his CAC career with the Carl Perkins Center as a Clinical Therapist. He later became the Director of Clinical Services, providing oversight of trauma therapy in 16-Children's Advocacy Centers across West Tennessee. In 2017, he relocated to the Northshore to assume the directorship of CAC Hope House. Thomas holds board certification in Trauma-Focused Cognitive Behavioral Therapy and formal certification in Trust-Based Relational Interventions® as both a Practitioner and Educator. Since 2019, Thomas has served as the Board Treasurer for the Exchange Club of West St. Tammany in addition to serving as a board member with the Louisiana Commission on Law Enforcement. He is a former board president for the Louisiana Alliance of Children’s Advocacy Centers, serving a term from 2018 through 2019. Thomas is featured as an annual guest lecturer at both Louisiana State University and Nicholls State University for advanced training relative to the neurological impact of complex developmental trauma. Thomas holds professional memberships with the Louisiana Counseling Association and the American Professional Society on the Abuse of Children. His research interests include normative conformity, complex developmental trauma, and the neurological effects of trauma. He resides in Mandeville with his beautiful wife Sayuri and three children, Zoe, Emma, and Owen.

Stacie LeBlanc, J.D. Stacie LeBlanc, JD, MEd began her career as a child abuse prosecutor in Jefferson Parish more than 30 years ago. Ms. LeBlanc became the chief of the Felony Child Abuse Division, began the Family Violence Program and helped open Child Advocacy Centers in rural and urban parishes. She received the “Outstanding Prosecutor Award” from Victims and Citizens Against Crime for the unit’s 94% conviction rate and the prosecution of a 20-year-old child rape case, which garnered national media attention. Ms. LeBlanc serves on the board of directors of several national organizations including as President of the American Professional Society on the Abuse of Children (APSAC), the National Review Board for the United States Conference of Catholic Bishops, as well as the National Initiative to End Corporal Punishment. She was the founder and first President of the Louisiana Alliance of Children’s Advocacy Centers. Ms. LeBlanc is the Founding Director of the New Orleans Children’s Advocacy Center and Audrey Hepburn CARE Center, two nonprofit programs for Children’s Hospital New Orleans that treated over 1,500 children annually. Stacie regularly teaches on the prevention of child sexual abuse. In 2017, she launched the Child Advocacy Studies Training (CAST) Program as an adjunct professor at Tulane University. CAST is a nationally recognized curriculum training students how to effectively respond to child maltreatment utilizing a multidisciplinary approach. Stacie has received numerous recognitions for her advocacy and was recognized for 11 successful legislative amendments. She was named the Champions for Children Awardee for Policy and Legislation by Prevent Child Abuse Louisiana, received the FBI Directors and Community Leadership Award, and the Health Care Hero Award by New Orleans City Business. Stacie was honored with the Lifetime Achievement Award from Victims and Citizens Against Crime for her contributions to the field of child maltreatment.

Stacy Faulkner is currently serving as the Clinical Director at Hope House Children's Advocacy Center and is a board-certified and Trauma Focused-CBT Certified Therapist (LPC, NCC). She earned her BAS (2010) and MA (2013) degrees in Psychology and Counseling (respectively) from Dallas Baptist University. Her passion and primary focus over the past decade has been in trauma work with children and adolescents. Stacy completed her internship at the Children’s Advocacy Center for North Texas (formerly CACDC) and at Hope House CAC where she started in April 2018. Stacy is also trained in Trust-Based Relational Interventions (TBRI) and recently earned certification/accreditation in both Positive Discipline and Triple P (Positive Parenting Program-Level 4) to better support caregivers in parenting traumatized children. Originally from Nashville, TN, Stacy now lives in New Orleans with her husband and a very spoiled basset hound.

Books by this Author